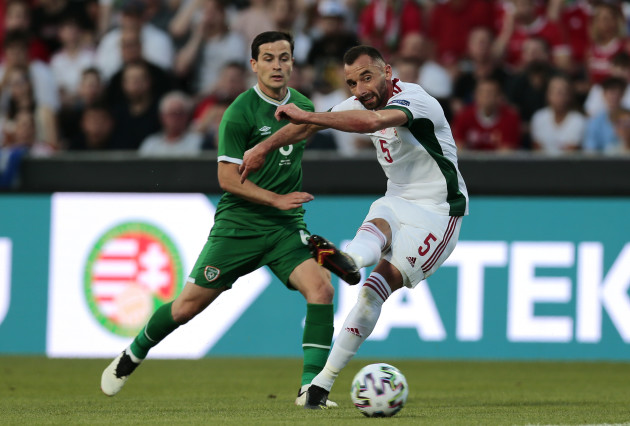 Hello, and welcome to this evening’s liveblog.

After 11 games without a victory, Ireland finally got their first win under Stephen Kenny against Andorra last week.

Yet not too much can be read into a success over one of the weakest sides in European football, so tonight’s match against Hungary — who have qualified for the Euros — should provide a stiffer test and give a better indication of whether this side has progressed considerably under Kenny.

The Ireland manager has opted to pick a number of experienced players in his starting XI, which suggests he feels this is quite an important game for morale, despite the fact that it’s a friendly. 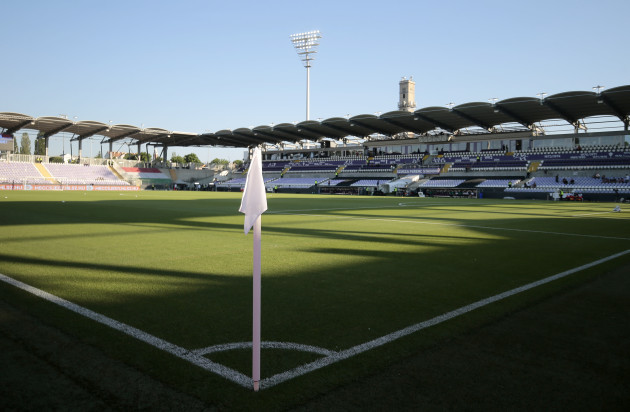 A general view of the Szusza Ferenc Stadium, Budapest.

Who do you think will win?

Stephen Kenny confirms to RTÉ that Ireland will be playing a “fluid” 3-4-1-2.

He also confirms Shane Duffy will play as the right-sided centre-back. 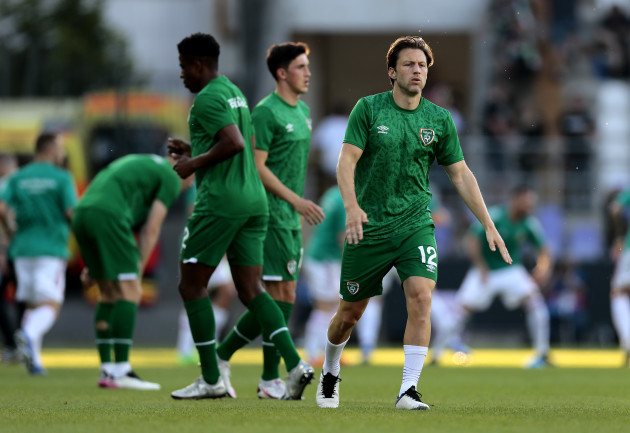 Republic of Ireland’s Harry Arter warms up prior to the international friendly match at Szusza Ferenc Stadium, Budapest.

Unfortunately, there was audible booing, as Ireland players took the knee before the game.

It hasn’t been a particularly assured start by Ireland.

Hungary are on the front foot, with the visitors giving the ball away cheaply on more than one occasion.

Cullen’s free-kick from wide finds Egan, and the defender’s header comes off the crossbar.

2 – Last time out, Republic of Ireland picked up their first victory under Stephen Kenny, while it was their first win since beating New Zealand in November 2019. They are looking to win consecutive matches for the first time since March 2019 (vs Gibraltar and Georgia). Gradual.

Ireland have tried playing out from the back on more than one occasion.

Yet they’ve look uncomfortable in doing so, with Hungary’s high pressing causing problems.

A low ball in deflects across the box towards the onrushing Bolla, but the Stoke man is alert to avert the danger. 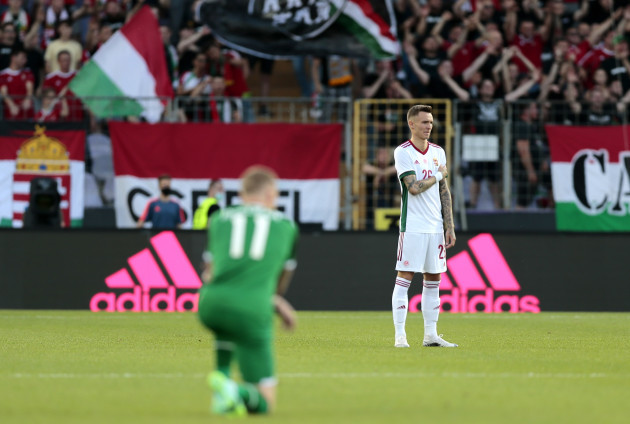 It’s been a fairly uneventful opening, with Hungary having 54% possession without really threatening.

Ireland haven’t really got going from an attacking perspective, with an overhit pass by Troy Parrott towards James McClean on the counter the latest stray ball.

Hungary continue to have the better possession and territory so far, without looking like scoring.

Ireland continue to be slightly sloppy on the ball, and aside from that Egan chance from the set-piece, they haven’t threatened either.

It’s just hard to imagine them scoring at the moment — they’ve struggled to get out of their own half for much of the game so far.

Worryingly for Ireland, Adam Idah has picked up a knock.

The Norwich youngster looks like he’ll be okay to continue though.

Fiola finds Szalai, and Bazunu makes a good save to stop the header.

Moments later, Hourihane has to clear an attempt off the line from a corner, as Hungary rally all of a sudden.

McClean’s cross just misses Duffy’s head, before Cullen’s subsequent delivery is too close to the goalkeeper.

Better from Ireland, who are showing more purpose in attack in recent minutes.

Hourihane curls a dangerous free-kick in, but it narrowly eludes everyone.

This is a decent spell for Ireland, as half-time approaches.

Superb from Gavin Bazunu – the teenager denies the hosts with a terrific point-blank save https://t.co/n3vd2sk3dM #RTEsoccer pic.twitter.com/0afXZLFHgM 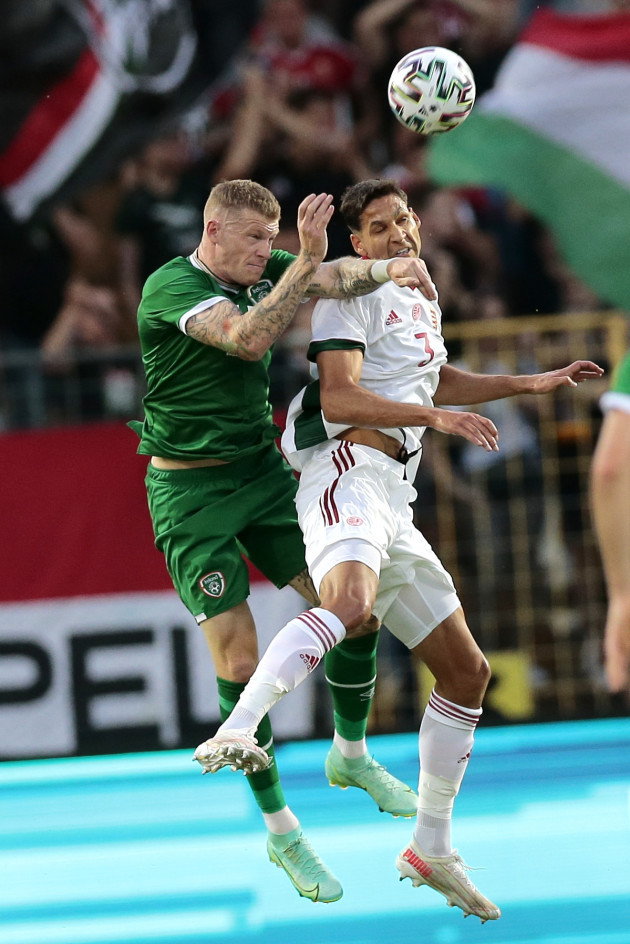 The second half has begun…

Ireland make one change at the break.

Caoimhin Kelleher is on for his senior international debut, in place of Gavin Bazunu.

The second half has begun in a similar manner to much of the first.

It’s been quite scrappy and stop-start, with chances few and far between.

Good perseverance from Parrott there.

He loses the ball as he tries to break away on the counter, but he then gets back well to regain possession and recommence Ireland’s attack.

The ball breaks kindly for Szalai on the edge of the area.

However, Kelleher gets down well to parry away the Hungarian attacker’s low snapshot.

Parrott and Hourihane have been replaced by Horgan and Molumby.

Some of the players have looked a little tired in the second half, so it felt a change was needed.

He controls a lofted ball and crosses towards Idah, but the defender is well placed to make the interception.

Egan gets an important block in to stop Kleinheisler’s goal-bound shot from the edge of the area.

The tempo of this game has increased in the last few minutes.

Kleinheisler gets away from the challenge of O’Shea.

However, his cross goes straight into the arms of Kelleher. 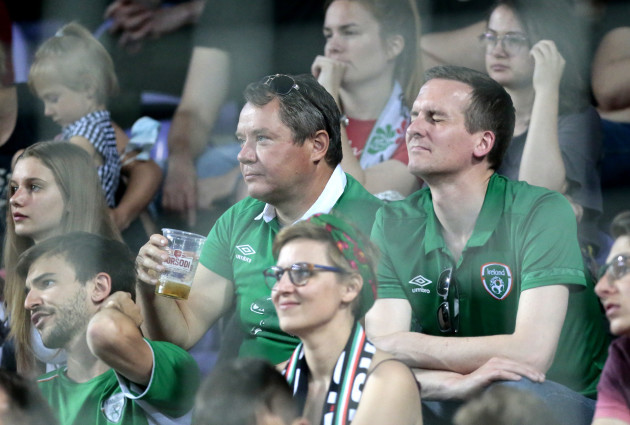 Republic of Ireland fans in the stands during the international friendly match at Szusza Ferenc Stadium.

Idah attempts a low shot from about 30 yards out.

Adam Bogdan, who has just come on, gets down well to parry it away.

Duffy makes a very good last-ditch tackle as Nego bursts through on goal.

The Irish defender injures himself in making that challenge, but he should be okay to continue.

Knight is fouled by Szalai, after good work by Idah in the build-up.

It earns Ireland a free kick in a promising position, but Cullen’s delivery is cleared behind for a corner by Kecskés.

Knight puts in a decent cross, but Kecskés gets to the ball ahead of Idah and wins a free kick.

The Derby youngster has been one of Ireland’s standout players this evening, showing great energy even deep into the second half. 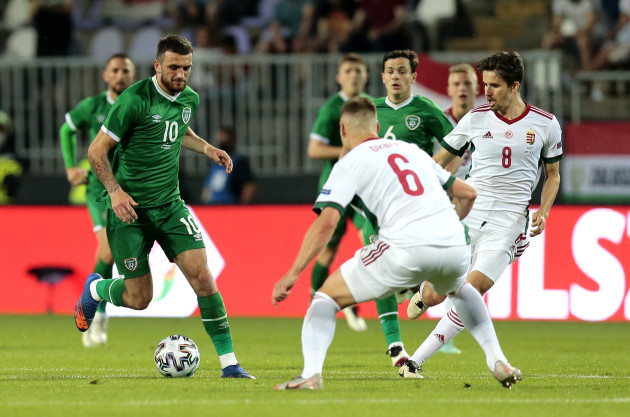 Knight’s cross finds McClean, whose header is saved by Bogdan.

Ireland have produced some decent attacks of late, with Knight looking more comfortable since switching to the right-hand side.

As I type, Szalai gets on the end of a cross, but his header is tipped over by Kelleher.

From the ensuing corner, the Liverpool youngster makes another good save, parrying away Szalai’s shot after the ball breaks kindly for him on the edge of the area.

Another change for Ireland.

Ryan Manning replaces James McClean, who has worked tirelessly down that left flank.

Anything Gavin can do…! Brilliant stop from Kelleher on a night where both of Ireland’s young keepers have shone https://t.co/n3vd2sk3dM #RTEsoccer pic.twitter.com/t4GknIzuhX

Another half-chance for Hungary.

Dara O’Shea makes a mess of his attempted clearance, before Szalai curls a shot just wide from the edge of the area.

A double change for Ireland.

Collins replaces Idah, while Ogbene is on for his senior international debut, replacing Knight.

The Nigeria-born winger almost scores straight away. Horgan plays him through on goal, but he can only find the side-netting from a tight angle.

There will be three minutes of stoppage time.

It’s finished 0-0 and a draw is probably a fair result, as it’s been a pretty evenly fought match.

Kenny can take positives from the performances of a number of players — Shane Duffy, John Egan, Jason Knight and both goalkeepers were among the standouts for Ireland.

They were up against a side who are going to the Euros and who are on a long unbeaten run, so from that perspective, 0-0 is a decent result.

There were some familiar problems though. Ireland looked a little bit lacklustre and lacked dynamism in attack at times, particularly in the first half.

They improved after the break, however, and had a couple of decent half-chances, though Hungary also went close on a couple of occasions too.

It could have been a dream debut for Chiedozie Ogbene but the angle was against him! https://t.co/n3vd2sk3dM #RTEsoccer pic.twitter.com/sIT4b3Fp04 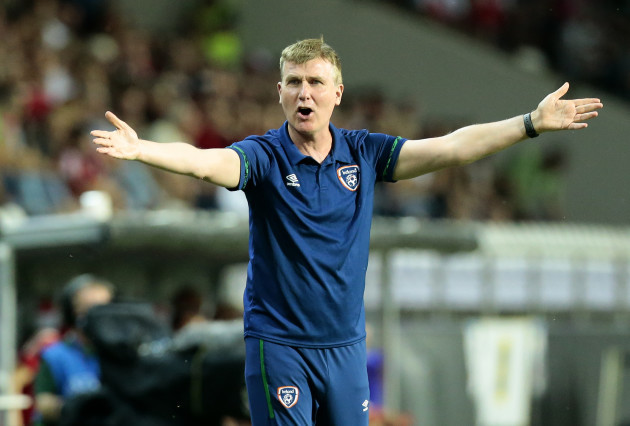 Right, that’s it from me for now.

Thanks for reading and commenting.

Contribute to this story: John Kierans: When it comes to clamping down on online gambling all bets are off 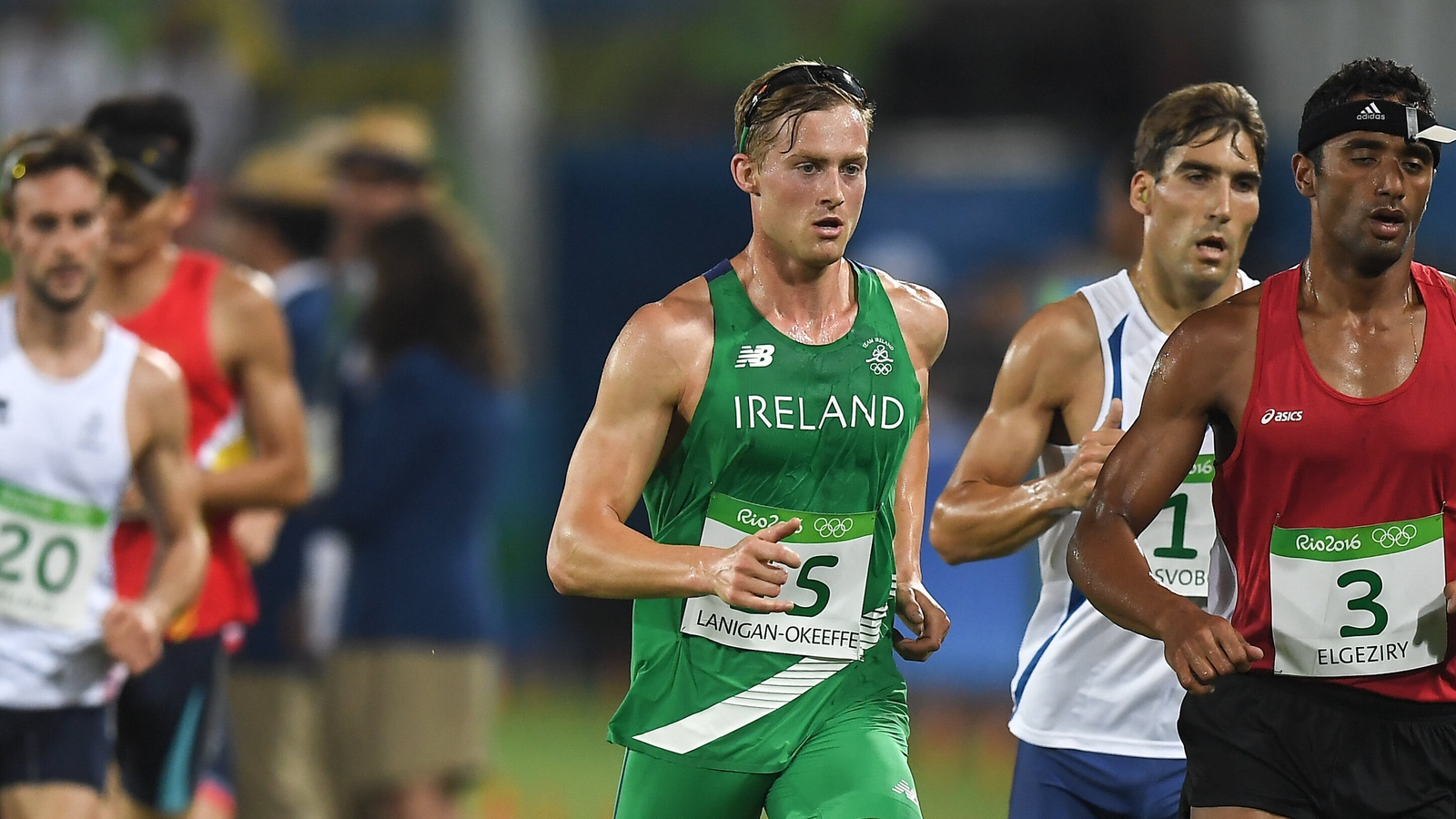 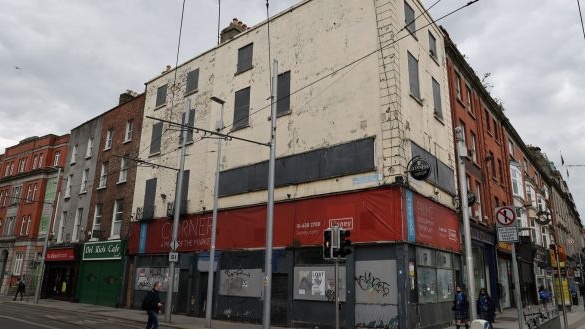